New Orleans is such a timeless city, that it is only right that I captured a number of my images in black and white. My own take on the key to black and white images is to either capture a scene which accentuates historical content, or to minimize small details in the image, allowing the contrast in tones to catch the eye. There’s plenty of ways to do this in New Orleans.

One of my favourites was a scene that was filled with detail on Bourbon Street. Although detail in a mono image is something I do try to avoid; I loved everything that was going on in this shot. It was a rainy Saturday afternoon, and the black and white conversion added depth to an image which would otherwise be les than vibrant. What I love is the person crossing the street with the umbrella; it almost adds a surreal quality to an otherwise busy scene.

This second image is shot of a very talented acoustic rag time jazz band playing on Royal Street. They are called Tuba Skinny and can be found either playing live in ad-hoc venues like this, or in the Spotted Cat on Frenchmen Street. Black and White works for this image as, for me, it conjours up images street performers in other exotic places around the work. The apparent passion in the face of the performers accentuates this. 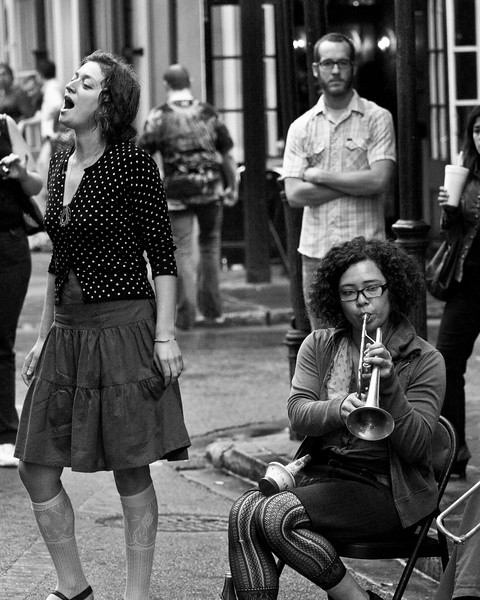